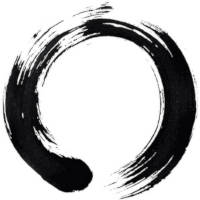 Hello, world!
My name is Justin.

This is a blog about solving (often ridiculous) problems in smart ways.

The first post in an epic to learn to rank lists of things!

A lot of machine learning problems we deal with day to day are classification and regression problems. As a result, we probably have developed some strong intuition on how to approach these types of problems.

But what would we do if we were asked to solve a problem like this one?

Say that each training example in our data set belongs to a customer. Say that we have some feature vector for this customer which serves as an input to our model. For our labels we have an ordered list of products which are ordered by relevance to that customer. How can we go about training a model that learns to rank this list of products in the order described by our labels?

I’ll tell you the tautological answer to this question:

We must ‘learn to rank’!

By the end of this series, I hope that you’ll have some idea of how to approach a similar problem in the future.

What do you mean by ‘learning to rank’?

Much of the following is based on this great paper: Li, Hang. (2011). A Short Introduction to Learning to Rank.

The very first line of this paper summarises the field of ‘learning to rank’:

Learning to rank refers to machine learning techniques for training the model in a ranking task.

Great! That was easy!

The paper then goes on to describe learning to rank in the context of ‘document retrieval’. Let’s use a scenario most of us are familiar with to understand what this is: searching for an article on Wikipedia.

In learning to rank, the list ranking is performed by a ranking model \(f(q, d)\), where:

Applying this to our Wikipedia example, our user might be looking for an article on ‘dogs’ (the animals). The user types in the word ‘dogs’ into the search bar and is presented with a list of articles that’s ‘sorted by relevance’. The top 3 results are these:

We mentioned that this is a supervised learning task. What does our training data look like for such a task?

Let’s continue on with our Wikipedia example.

Let’s say that someone has created a dataset by asking real people to submit queries to the Wikipedia search engine and asking them to assign a number to indicate the relevance of an article in the search results set. Let’s say that the curator asks each user to assign each article one of these numbers:

These are arbitrary numbers where the larger the number, the more relevant the article is. We call these relevance grades and are one such way of representing relevance in a learning to rank task.

We should take note of a few things about our example:

What features will we be using?

We’ll be using neural nets so we could be using any arbitrary feature that we think might help in our ranking task.

However, for our example, we’ll be focusing on using the words in our queries and documents!

How on earth can we use words as inputs into our neural net? Words aren’t numbers that can be optimised! You’ve lost your mind!

I concede the last statement. But give me a chance to explain. Let’s briefly explore the wonderful world of word embeddings!

Say that we start with a two-dimensional space: 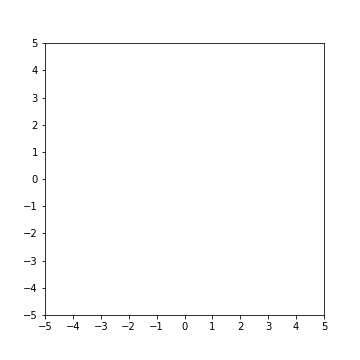 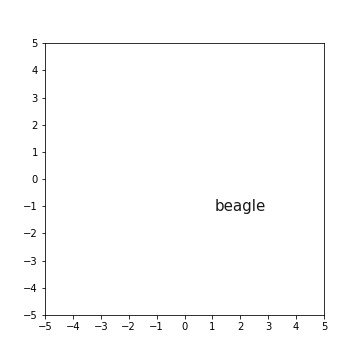 Let’s repeat the process with another word. Let’s plot the name, ‘snoopy’ at the point represented by this vector: 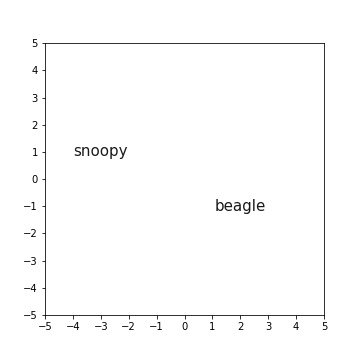 Take a look at that! We have two words which we’ve represented using a bunch of numbers! We call these vectors word embeddings!

If you’re more pragmatically inclined, then you can stop reading here. Just keep in mind that we’ll be using such word embeddings as our features in the upcoming posts.

However, if you’re more inclined to obsessively understand how things work like I am, then please read on, my friend!

Why would we want to represent our words as embedding vectors?

To understand the benefits of using word embeddings to represent our words, it’s useful to know a bit about how some of the successful language models were built in the past. Let’s go on a journey!

Most of the following summary is based on the ‘12.4 Natural Language Processing’ from the bible of deep learning, ‘Deep Learning’ by Goodfellow et al.

… a natural language or ordinary language is any language that has evolved naturally in humans through use and repetition without conscious planning or premeditation.

What are language models?

A language model deﬁnes a probability distribution over sequences of tokens in a natural language.

Why would we want to define such probability distributions? Good question! Given our language model, we could ask a question like this:

Which sequence is more likely in our language: “Snoopy is a beagle” or “Beagle Snoopy is”?

If we’ve built our language model using grammatically correct texts, then we would find that the first sequence is more likely to occur than the second one! We could also ask a question like this:

Given the sequence “Snoopy is a”, which word out of my vocabulary of words maximises the probability of the entire sequence?

These probabilities are very useful! For example, they can be used to solve real-life problems like predicting the next word you are about to type in a sentence.

Apparently it is a Greek suffix which means “something written”!

How were these words represented traditionally?

Traditionally, \(n\)-grams were represented in the one-hot vector space.

Let’s say that we create word-level tokens from our sentence, ‘Snoopy is a beagle’. Let’s create our word tokens from this sentence. At this point, we’ll also import the packages used in this article:

We’ll map each word to an index and assign a one to the component at the same index in our one-hot vector. The rest of our components will be zeros.

We can observe a few things about these vectors.

Let’s say that we have our four same words. This time, we’ll represent each word with two-dimensional vectors of floating-point numbers. We’ll randomly create them like this:

Next, the distance between ‘Snoopy’ and ‘is’:

In both cases, we can see that the distance is \(\sqrt 2\)! These words are equally dissimilar!

Let’s return to our randomly created word vectors. We can see that the distances between these word vectors don’t all equal \(\sqrt 2\)! This is a good start. Assuming that each word vector corresponds to the same words as in the one-hot vector example, we can observe the differences in our Euclidean distances:

Wouldn’t it be nice if we could learn representations for each word where the distance between vectors can be used as a gauge for their similarities?

Let’s now talk about why these dense vectors can help us achieve this. I can’t explain this as well as Yoav Goldberg did in A Primer on Neural Network Models for Natural Language Processing, so I will quote from it!

The author starts with this, beginning on page 6:

The main benefit of the dense representations is in generalization power: if we believe some features may provide similar clues, it is worthwhile to provide a representation that is able to capture these similarities.

The author then describes a scenario:

He then explains what the outcome of this scenario would be if we were to represent the words in the one-hot vector space:

He then explains what the outcome could be if we were to use word embeddings to represent the same words:

By allowing a concept of a ‘dog’ to be distributed across potentially multiple vectors and multiple dimensions, our dense word embeddings allow us to “recognize that two words are similar without losing the ability to encode each word as distinct from the other” (Goodfellow et al, pages 458-459).

To summarise this section, we can say that word embeddings are generally more efficient and meaningful representations of our words compared to one-hot vectors. We’ll be using these word embeddings as features in the rest of our tutorial.

We will represent each of these as word vectors. Our goal is to train a model that places word vectors with similar meanings closer together in some two-dimensional space.

Instead of manually preparing our tokens and assigning indices to them, we’ll use the Keras Tokenizer. Firstly, we’ll create our vocabulary:

Then we’ll convert our sentences into sequences of indices which map to words in our vocabulary:

We take note of the size of our vocabulary which we will use when creating our Embedding layer. Index zero is a special padding value in the Keras Embedding layer so we add one to our largest word index to account for it:

We want our neural network to learn to pull words in each of our sentences closer together, while also learning to push each word away from a randomly chosen negative example. This negative sampling is accomplished by the negative_samples argument in tf.keras.preprocessing.sequence.skipgrams. We use this function to create a newly sampled training set at the beginning of each epoch:

We then build our model. The focus of this post isn’t to explain this toy model so I’ll be brief: 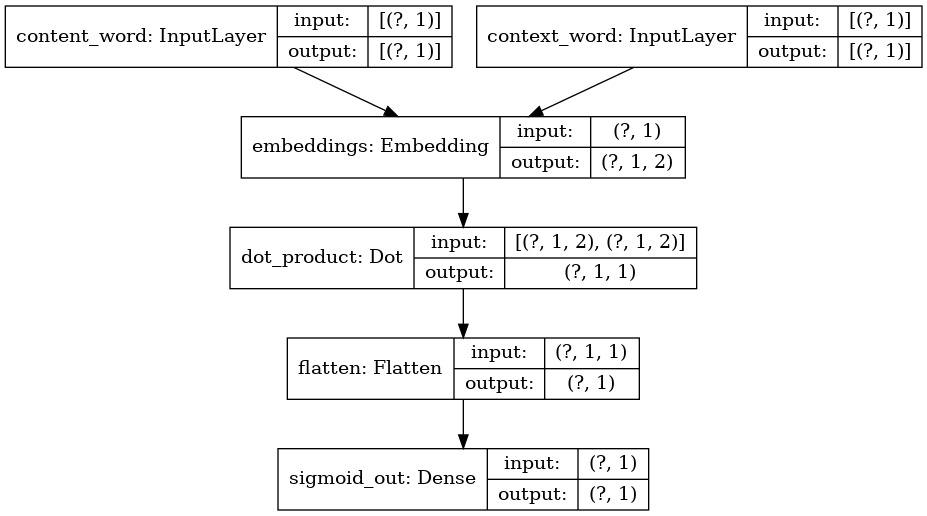 We train the model like this while saving plots of our embedding vectors upon completion of each epoch:

The result is a bunch of embeddings that move through space!

We start out with our words scattered randomly throughout our two-dimensional space. Over the course of twenty epochs, our model has learnt to place the words in our pairs closer together!

We’ve begun our ‘learning to rank’ adventure. We briefly explored a motivating example. We then spent some time exploring word embeddings so that we can use the words in our queries and documents as features in our upcoming model.

Next time, we will be exploring ListNet and implementing it.

You May Also Enjoy

Learning to rank is good for your ML career - Part 2: let’s implement ListNet!

The second post in an epic to learn to rank lists of things!

Learn to code for data: a pragmatist’s guide

A recipe to go from spreadsheet to code

Make your life easier by Dockerising your TensorFlow

Get deep-learnin’ on Google Cloud Platform the easy way

Create a Deep Learning VM on GCP in 2 minutes